Dragon Ball Xenovess For XBox One

Dragon Ball Xenovess For XBox One based on popular cartoon series and now this game consists all the characters from 90's and adding them in simple tournament where players can choose their favorite characters to fight all others and showing their skills that even the weakest can beat the strongest however its not that easy because every update Dragon Balls cartoon series introduces more strong characters and powerful enemies.

This game can be played by anyone cause its based on cartoon series and one of the best even popular then other cartoon series like ant man and flash this game main character Goku AKA Kakarote is decedent of saiyans who came from another world called planet vegeta. This sayians bloodline goku is related to is of warriors and was sent to world just to destroy the world and rule over it but because of injury on head he forget for why he was sent to earth .

Call of Duty Advance For Xbox One
0.0 (0)
Category: Xbox One Games
Call of duty Black ops II story goes around... 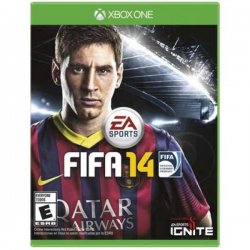 FIFA 14 For Xbox One
0.0 (0)
Category: Xbox One Games
Return To Top
All Rights Reserved 2008-2022 Pakistani.PK
backoffice@pakistani.pk