Kash Main Teri Beti Na Hoti is a Pakistani drama serial which was telecasted in 2014 on drama channel GEO TV. In the serial famous actress, Fatima Effendi is playing a leading role of a poor girl Khushi who's a father is newspaper seller and mother is a maid in a rich house who always insulted by her owner. The drama tells us their hard living story that how they run their poor life with a low earing. The serial was written by Kifayat Rodani and directed by Syed Ali Raza Usama. 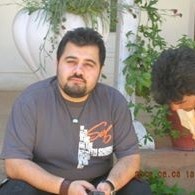