Yasir Arafat is a Rawalpindi-based all-rounder Pakistani cricketer. He is playing cricket since childhood. He took part in Under 15 cricket. His swing style is both to and from. In his debut test match, he shows his all-rounder abilities by taking 7 wickets and scoring 44 runs. He displays his all-rounder abilities in his first Test debut match against India where he scored 44 runs in the first innings and took 4 wickets. He was also a part of a team in cricket world cup 2007. In English domestic cricket, he was signed as an overseas player. He is able to swing the ball to and from the batsman. From 2015 he playing for Hampshire. If you are looking for Yasir Arafat biography, cricket stats, photos, and cricket videos then you can find them here. you can also find the public opinions and reviews about Yasir Arafat here. 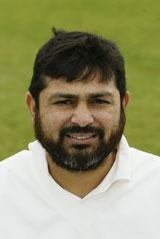