Basit Ali is a Pakistani former batsman who played from 1993 to 1995. He made his Test debut in 1993 against West Indies. He played also New Zeland and South Africa. He played 50 ODIs and 19 Test matches. He made 2123 runs in his bating carer.

If you are looking for Basit Ali biography, cricket stats, records, age, photos, and cricket videos then you can find them here. you can also find the public opinions and reviews about Basit Ali here. 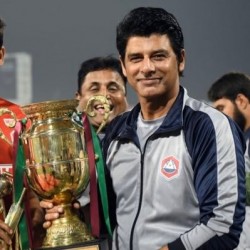