Aamer Sohail is a Pakistani former left-handed opening batsman and left-arm spin bowler. He appeared in his debut Test match in 1992 against England. After that, he played ODI against Sri Lanka. He was an important part of the team that won the 1992 World Cup in Australia and New Zeland. He played 46 Test matches and 156 ODI matches.

If you are looking for Aamer Sohail biography, cricket stats, records, age, photos, and cricket videos then you can find them here. you can also find the public opinions and reviews about Aamer Sohail here. 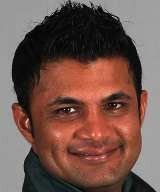